You will not be able to play the games, trade with others, take from updates, etc. until after you've been moved from the Pending section on the Members List!

Like the name suggests, this game is all about collaborating-- specifically with your fellow members to help create a deck! Each round, a theme will be chosen and players can donate an image that they think fits the chosen theme. If it does, and the image is suitable for card making, it will be made into one of the cards in the deck which will eventually be released for everyone to collect once finished!

While this is one of our Monthly Set games, a new round will only be posted once the previous round has been completely finished (meaning we must get enough image donations to make the deck). If a round is not finished by the time a new month starts, the next round may not start until the following month depending on when the previous round finished.


The deck we're making this month is...
SHOUJO!
This round we require you to submit an image that features a shoujo series! As always, official art only and all players are required to link any information page that proves it's considered a shoujo series! Please also make sure your image is not already in an existing character or special deck!

Not sure what's considered shoujo? See sites like Wiki's page on shoujo manga or browse through the shoujo tag on MAL for anime and manga for ideas/examples! Please be warned though that there are some series listed in the MAL tag that I may reject if I feel like they aren't really shoujo, in which case I'll hold a spot for you in the deck for 1 week so you can submit another image.


DONATORS
21/21 spots have been filled! The master badge will be decided from the donations submitted at the end of the round.

Donation #: 01
Featuring: Wedding Peach - Wedding Peach, Angel Daisy, Angel Lily, Angel Salvia (wiki) - though we all know I'm a big fan of this genre, so I would know what's what lol!
Image: BOOM!
Specifications: I'm pretty sure the image is big enough that you should be able to fit all four in the card! 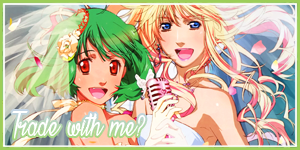 Donation #: 1
Featuring: Akagami no Shirayuki-hime - Shirayuki and Zen (MAL)
Image: first choice, second choice
Specifications: i dont mind a close crop for the first one since I know theres alot of text
Top